E pluribus unum (pronounced /ˈiː ˈplʊərɨbəs ˈuːnəm/; Latin [ˈeː ˈpluːrɪbʊs ˈuːnũː]) — Latin for “Out of many, one“[1][2] (alternatively translated as “One from many“)[3] — is a phrase on the Seal of the United States, along with Annuit cœptis and Novus ordo seclorum, and adopted by an Act of Congress in 1782.[2] Never codified by law, E pluribus unum was considered a de facto motto of the United States until 1956 when the United States Congress passed an act (H.J. Resolution 396), adopting “In God We Trust” as the official motto.[4]

Last weekend I received a call from a good friend that was out on the garage sale circuit. He told me to get down to a particular sale because the young man had a stack of Barnum & Bailey Circus Posters that his grandfather had printed in his printing company back in 1945. My friend is good enough to call me, even in the competitive world of collecting, after he has picked a carcass clean, if he thinks I might throw him back a bone in the future. In this case he knows my obsession with paper goods, especially posters, and thought I might like to head down and pick up a few tidbits AFTER I call him back to let him know if the posters he set aside before calling me are actually real and valuable (the underlying reason he called me in the first place).

I grabbed the Missus and headed off to check it out, not holding much hope that the posters were real Barnum & Bailey from 1945, in some kid’s garage in my little city in the mountains, but, hey, you never know. When we pulled up I could see the stack of posters in the driveway and a single piece the seller had put in a plastic sleeve and leaned against the table for public viewing. I began to get a little excited, seeing that the sizes were correct and that the images were unusual. Not your typical reproduction fare. I sauntered up to the pile, masking my excitement, and asked the gentleman what he was asking for the posters. “$200 for the top one, $50 for some of the ones with animals, and $20 for the plain lettering.” he said. “They are original and I have sold alot on eBay for good money. They are worth more than I am asking. Some guy took quite a few this morning with hippos, elephants, and clowns. These are the only ones I have left.” he continued.

I quickly put together a stack and gave my wife the out-of-the-corner-of-my-eye sign of approval and asked him how much if I took the whole stack. We came to an agreement and I packed the posters down to the car before he had time to think.

When I headed back up the driveway I saw a large framed picture of an eagle in front of American flags with a banner above its head reading E Pluribus Unum. I hadn’t even noticed it before in my obsession with the circus posters but i quickly strolled over to give a closer look. Upon inspection I found that it was actually not a picture, but instead was a sort of needlepoint, and was actually very old. It had some fading issues but for the age it was beautiful. “What’s the story on this?” I asked the seller. He told me it also came from his grandfather and that it had been in his family for as long as he knew. He had it appraised a few years back and was told it was worth $500. That was all he knew. I don’t know why, but I had to have it. I negotiated a great price and took it home. I have been looking at it for a week and am looking for the perfect place to give it its worth, out of direct sunlight, of course. 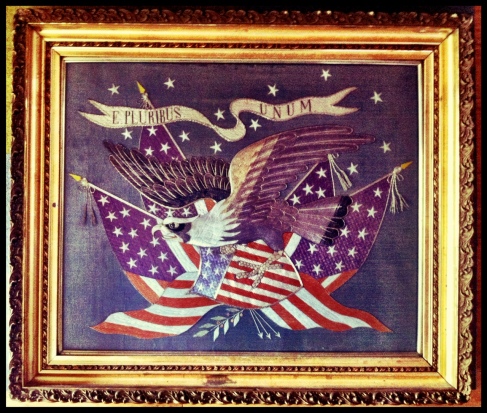 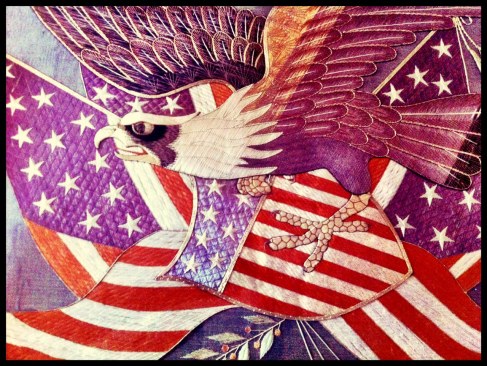 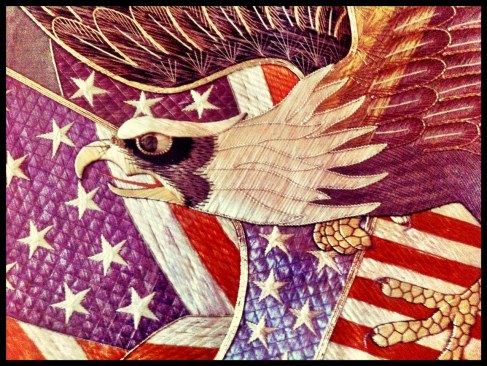 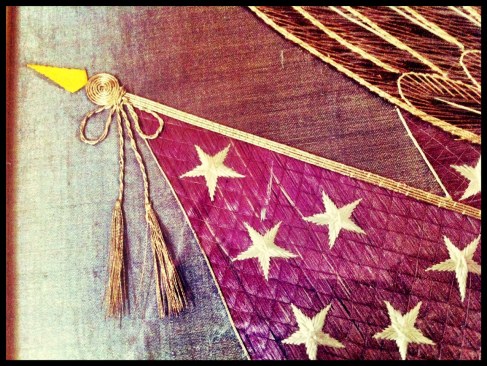 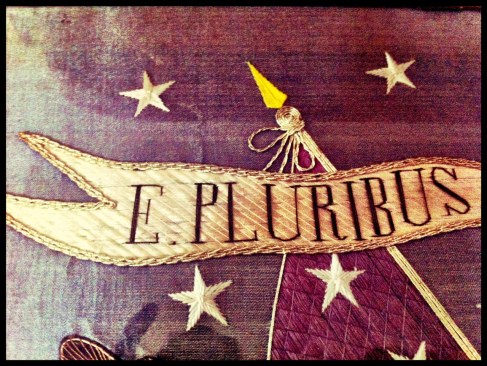 Any information about what this might be would be greatly appreciated.

I haven’t forgotten about the Barnum & Bailey Circus Posters. I will get some photos taken and get them posted soon, now that my obsession with the Eagle is dying down.

After researching this piece I finally came across some information that I believe identifies what this piece is. In the late 1800’s, when tourism to the Orient by ship became all the rage, merchants in China, then later in the Philippines, began manufacturing souvenirs for the visiting wealthy tourists. One class of souvenir was patriotic needlepoint on silk. I found an auction listing for a similar piece that I think was done later than the piece I acquired. It states that this piece was from 1899. One of the sources of information showed a later example from the early 1900’s where the fabricator left out the “R” in the sentence “In God We Trust” causing it to read “In God We Tust”. It is for this reason I believe the eagle in mine is surrounded by only 12 stars in stead of 13. The example of the 1899 piece is: 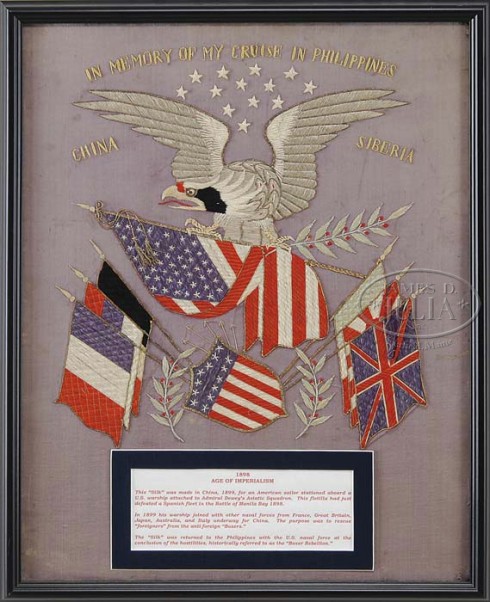 Obsessed collector and entrepreneur. Find out more at www.scott-ramsay.com END_OF_DOCUMENT_TOKEN_TO_BE_REPLACED
This entry was posted on Thursday, April 12th, 2012 at 1:24 pm and tagged with America, antique flag, antiques, Barnum & Bailey, circus, E Plaribus Unum, E Pluribus unum, garage sale, needlepoint, Politics, Untited States memorabilia, vintage posters and posted in Furniture & Home, Posters and Ephemera. You can follow any responses to this entry through the RSS 2.0 feed.
« Photo of the Day
Friday the 13th »