Sometimes, on my quest for vintage goods, I get up way too early in the morning and venture off to push, shove, and run around like a fool, at estate sales. This week one of my local estate sale companies posted a listing for a hoarder’s collection of junk that I knew would bring out the worst of my fellow estate sale cronies. The listing said that the sale included tools, furniture, vintage fishing tackle, and a huge collection of glassware. It was accompanied by teaser photos that showed the range of items I knew would cause the old-timers to get up WAY too early for me to compete. I decided the night before to set my alarm for an hour before the numbers were handed out so that I could show up in mid-pack and pick over the leftovers.

The next morning I stumbled out of bed and headed out the door earlier than expected, arriving an hour before the numbers were to be handed out. I knew it was a blow-out as soon as I turned down the long country lane and saw cars lined up on both sides of the street, parked like the drivers had been forced to abandon their vehicles in the wake of a nuclear detonation. A ramshackle crowd of people were dashing back to their cars from the head of the chaos, forcing me to believe that perhaps the sale had been canceled, or there were so many people that the faint of heart had turned around in disgust to abandon the carnage. I parked and began my walk, keeping my head down while avoiding eye contact, so as not to hear anyone telling me how lousy it looked. As I entered the driveway and scoured the scene for the sign-in sheet I was amazed at the numbers of people that had shown up. Way more than even I imagined. I pushed my way into the crowd of people straining their necks to get a glimpse of a treasure, like rubberneckers trying to see the bloody victims at a crash site. When I reached the front of the crowd I looked down at the clipboard to discover that the numbers were already handed out, as I had overlooked the listing’s fine print that stated that the numbers would be given out at 7am instead of 8am to accommodate the large collection of needless crap that was being offered for sale. I said my hello to the estate sale boss and he handed me the number 77.

The sale was to be opened in 2 phases; first the outside at 8am so all of the items getting soaked in the rain could be rummaged through, and then a garage and tool room at 9am.

It was 7:05am, 38 degrees, and raining, so I headed back to my truck to wait. Just outside of the parking lot I saw an old friend huddled in his running vehicle with the heat on. He waved me to the passenger side to climb in and chat about the pending treasure hunt. The walk was shorter than my truck and I was curious what had dragged him out to the sale so I climbed in. He told me he had gotten here at 5:45am and had been number 24 on the sign-in sheet. The first person got here at 2am! My friend was after some vintage fishing gear and a small pile of antique baseball bats he saw in the photos but knew he would have a slim chance at #24 of getting what he came for. He could only hope that the sheer quantity of merchandise would confuse the first 23 ahead of him and he would be luckier than the others at heading to the exact spot he had calculated the gems would be displayed.

We talked for an hour and went over the photos on the website with my iPhone to plan his strategy. I was simply hoping that because I collect oddities that don’t interest as many people that I would come away with something. At 5 minutes to 8am the restless herd began to slowly crowd around the entrance to the outside arena. As soon as more than 3 people had positioned themselves in a small crowd the game was on, the blood had entered the water, causing a frenzy of activity as those with low numbers rushed to position themselves in their proper pecking order. Those with higher numbers simply pushed themselves up front and refused to move, thinking that the lower numbers would see the determination and give up. The worst in human behavior was beginning to rear its ugly head. My old-timer friend danced his way past the stubborn herd to take up his position while I hung way back, knowing that by the time my number was called people would be thinning.

Once the gates were open it was a mad dash for who-knows-what. You would think they were giving away donuts at Walmart on Black Friday the way people got all worked up, grabbing as much as they could hold, then shuffling off to a corner to inspect what they had grabbed, like Gollum leering at his Precious. I waited my turn, sauntered in and watched the characters overturn tables, rip through boxes, and fight over who touched “it” first. It is amazing to see the things people will buy at an estate sale that they would pass up for half the money in my retail vintage store, Casarama. I need to figure out how to create a chaotic shopping atmosphere in the store so that people will buy stuff they ordinarily would give to Goodwill.

I picked up a few things but talked myself out of buying them by reminding myself that I would have to sell them for twice the price in my store to the same people that were here at the estate sale, as I had noticed during the cattle-call that I saw several of my previously regular customers at Casarama with numbers in hand waiting to get in. I wondered why I hadn’t seen them in the store for the past few months. They are in the junking business now. I secretly am hoping that they come back into my store to ask for advice on opening their own store. If they do I am going to tell them that they should buy as much inventory at estate sales as they can find and get opened as quickly as possible because I am doing so much business I can’t keep my shelves full and I need a place or two to refer the hundreds of customers that have seen American Pickers and bought everything I had for sale and now want some really great vintage glassware and tea cozies. After evilly thinking this I told a couple of my ex-customers rummaging about that I was selling the Hell out of vintage hand saws and that they should get some, since I had seen 2 garbage cans full in the corner of the yard.

All the saws were gone later, so I either missed the boat, and they are going to be a hot seller soon, or I will have someone come into Casarama next week to ask me if I want to buy 200 rusty saws for $20,000 because the Roadshow had one last week for $100.

The only thing I found outside was a vintage microphone… I have since knocked the mud off of it and it shows well. Here it is pre-cleaning:

The second entrance phase at 9am was a total cluster-bungle. They asked the cattle to organize themselves by number in a line (their first mistake – assuming the animals could organize anything in their adrenaline infused state)  and that they would let the first 25 people in, then 5 at a time afterwards as people came back out after hunting (their second mistake – assuming the first 25 would ever come out). It took an hour to get to 77. By 77 I was frozen. As expected there was nothing left that was worth anything. The scene looked like a grocery store after a hurricane warning, with everything strewn about and upended. I had been acquiring vintage yardsticks over the past year for a project so I was pleased to find that an entire bucketful had been pushed back into the corner and deemed not worthy by the people looking for the latest Antiques Roadshow highlighted treasure. I headed out to the estate sale boss to haggle a bit, which is frowned upon at estate sales, but, hey, 76 people before me hadn’t given the yardsticks a second look and I was willing to buy in bulk. As I was negotiating a price for the entire lot a nosy-noseface shoved in to bark, “Hey, why you bargaining with HIM?!” while thrusting his neck and chest in my direction, to which I replied, “I spend THOUSANDS of dollars a year with this company, what do you spend?”, sending him away with a grunt to pay for his 50 cent vintage ball point pen.

It was a long morning. I always find something so I don’t get too worked up. I will skip the next couple of estate sales, as I always do after attending the first of the season and witnessing the human depravity, but will inevitably come back to another in a month or so, once I have told myself I am missing out on something really cool, or I am told a fishing story by a picker-friend about the $5 item he bought at the last sale that he sold for $10,000.

I will be back. I can’t help myself. It is among my greatest obsessive-compulsive hang-ups, the hunt for the vintage find. That horsehide jacket or Eames rocker or taxidermy animal. I’ve been doing this since 1987. From New York City to the Alemeda Flea Market. From Paris to El Rastro in Madrid. With the Missus and our kid. With good friends and educated competitors. Buying, selling, searching. Always with another project in mind. 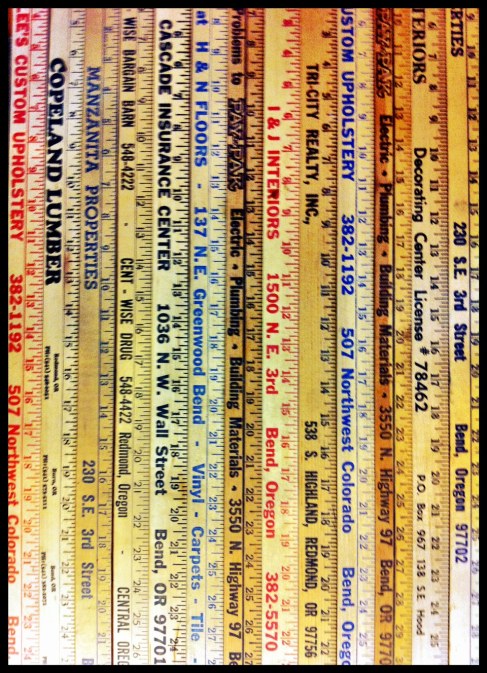 Obsessed collector and entrepreneur. Find out more at www.scott-ramsay.com END_OF_DOCUMENT_TOKEN_TO_BE_REPLACED
This entry was posted on Saturday, March 17th, 2012 at 4:21 pm and tagged with American Pickers, Estate Sale, Flea Market and posted in Furniture & Home. You can follow any responses to this entry through the RSS 2.0 feed.
« Yankee Hooligan’s P-Town Timbers Supporters
Everyday Carry Submission »

One response to “Estate Sale Madness & the American Pickers”